Subscribe to the Baseball Things Podcast for bi-weekly analysis

A successful road trip, including a rare series win in Houston, has the Seattle Mariners heading in the right direction. Now, the revitalized Mariners are positioned to climb even higher in the AL West and AL Wild Card standings during their upcoming homestand against the Red Sox, Twins, and downtrodden Angels.

Still, not everything went as planned for the Mariners during stops in Baltimore, Arlington, and Houston. Perhaps the most alarming development; the regression of Opening Day starter Robbie Ray. In confrontations with the Orioles and Astros, the 2021 AL Cy Young Award winner allowed eight runs, four home runs, and six walks in 10 innings. Certainly, suboptimal results from a pitcher expected to lead Seattle’s starting rotation.

So, what’s going on with Ray?

I’m not sure there’s a definitive answer to that question. But here are 10 things worth knowing about his 2022 season.

Strikeouts are down, walks are up

Baseball Reference credits Ray’s 11.1 strikeouts-per-nine innings as the all-time high in MLB history. Yet, the southpaw hasn’t been striking out hitters as often in 2022 as he did a season ago. Despite this downturn, his strikeout percentage remains better than league-average this year.

While we might find some solace knowing Ray still boasts an above-average strikeout rate, it’s hard to ignore a six-percent decline from his banner season in 2021. After all, striking out hitters has been the 30-year-old’s calling card throughout his big-league career.

Ray is also allowing more walks than last season. But we need to keep things in perspective when considering the success of a pitcher with a well-earned reputation for providing free passes to hitters. Since debuting with the Tigers in 2014, the left-hander has a career 10.2% walk rate.

He gives up a lot of dingers

In his most recent outing, Ray surrendered three home runs in the first two innings against the Astros. One to the first hitter of the game, Jose Altuve, and then a pair of dingers to Kyle Tucker and Chas McCormick in the second frame.

All told, Ray has allowed 14 home runs to 298 hitters this year, which equates to a 4.7% home run rate. Only three qualified pitchers have allowed homers more frequently than the nine-year veteran – Boston’s Nathan Eovaldi (5.7%), Bruce Zimmermann (5.4%) of the Orioles, and Washington’s Josiah Gray (5.3%).

Still, it’s important to recognize Ray has been susceptible to the long ball in recent seasons. Not just 2022.

Ray’s home run rate during his Cy Young campaign is relatively similar to what we’ve seen from him during his first season as a Mariner. However, we must remember home run numbers are down across the league in 2022. The MLB home run rate this year is 2.7% after being 3.3% in 2021.

Opponents may be clobbering home runs against Ray at an above-average rate in a season with depressed offense. But their hard-hit and barrel rates against the twelfth round pick of the Nationals remain relatively stable.

To be considered “hard hit,” a batted ball must have an exit velocity of 95-mph or greater. The league currently has a .480 AVG and .927 SLG on hard-hit balls this season. Similarly, a “barreled” ball is the ideal blend of launch angle and exit velocity. This typically leads to the most destructive hits against pitchers. Right now, barrels are creating a .708 AVG and 2.320 SLG for hitters.

The fastball isn’t as fast

Ray’s average four-seam fastball velocity is down 1.6 mph from his Cy Young campaign. In of itself, that may not seem like a big deal. Maybe it isn’t. Then again, the percentage of four-seamers he’s thrown with a velocity of 95 mph or greater is markedly down this year compared to last year and his career average.

It’s not just the decreased frequency of 95+ mph four-seamers that’s caught my eye. The uptick in negative results Ray is realizing on these pitches is also worthy of attention. For most of his career, he’s has held opposing hitters to an expected batting (xBA) hovering near or below the MLB-average. That’s changed in a bad way this year.

For those of you not familiar with xBA, it’s a Baseball Savant product representing a batted ball’s probability of becoming a hit based on its exit velocity and launch angle. Since xBA excludes defense from the equation, it permits us to better gauge the effectiveness of Ray’s high velocity four-seamers without the undue influence of good or bad fielders behind him.

Perhaps the decline in the velocity and effectiveness of his four-seam fastball has something to do with Ray turning to his slider more frequently in 2022. He’s employed the slider almost 11% more often than a year ago. During the same time period, fastball usage has dropped about 7%. 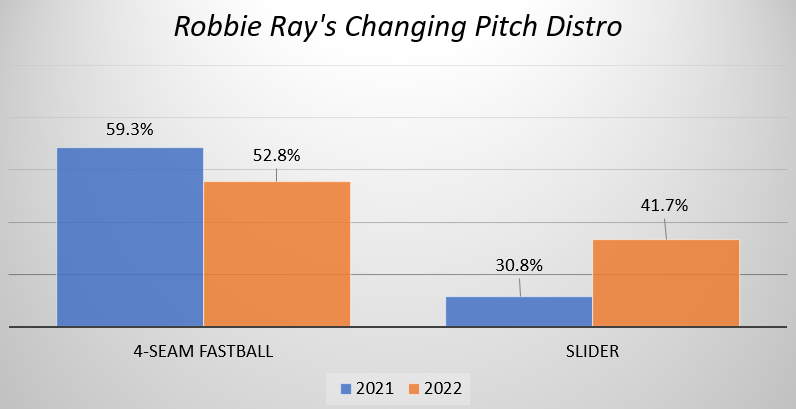 Ray’s slider has delivered better overall outcomes than his four-seamer this year. But that’s not necessarily saying a lot. Opponent xBA against the pitch is at its highest point of any season since the Statcast era began in 2015.

Hitters are swinging at his first pitch a lot

What I find more interesting than Ray leading the majors in first-pitch swing rate is the fact opponents are letting it rip on his first offering at a significantly higher rate than any season in his career. In fact, there’s been a 10% increase over last year.

Perhaps this is a nothing-burger fabricated by the imagination of a dull-minded blogger. But the opponent with the most runs scored (6) in a game against Ray this season swung at his first pitch more often (65.5%) than any other club has this year. That club would be the Chicago White Sox.

Adding a layer of intrigue to my pea-brain conspiracy theory, Chicago’s Tim Anderson commenting after his team’s April 13 assault on Ray that the White Sox designed a plan of attack for Ray.

“We succeeded with our plan and stuck to the plan throughout the whole game. We were able to pull out some more runs and stretch the lead a little bit.” – Tim Anderson

Was being aggressive on Ray’s first pitch part of Chicago’s plan? Perhaps Anderson was referring to something else he’d prefer keeping under wraps since the White Sox still have to visit Seattle this season. Then again, the numbers don’t lie.

Hitters are swinging at Ray’s initial offering much more in 2022 than ever before.

Ray is locating pitches in the strike zone about as often as he did last year. Yet, hitters are swinging at in-zone pitches far more frequently in 2022 than any time in his MLB career.

Perhaps this change in approach has something to do with a lowered fastball velocity, altered repertoire, or newly-crafted strategy employed by opposing hitters. Having said that, I’m not qualified to address what’s required to be a successful professional pitcher at any level. For all I know, Ray could be tipping his pitches.

Still, the increased frequency of in-zone swings against Ray has captured the attention of this pitching-dumb blogger.

Despite his struggles this season, Ray continues to post. Last year, he paced the AL with 193.1 innings, which was fifth most in MLB. This year, his 70.2 frames currently ties him for fourth best in the majors with Oakland’s Frankie Montas. Only Sandy Alcantara (83.2), Aaron Nola (74.2), Justin Verlander (71.2), and teammate Logan Gilbert (71) have more mound time than Ray.

In the length department, Ray leads the Mariners with eight starts of six-or-more innings. Moreover, only 11 starters have more six-plus inning outings than the Brentwood High School product. This matters as we reflect on Ray’s season to date. The competitiveness and ability it takes to remain in games when a pitcher doesn’t have his best stuff shouldn’t be overlooked. It’s a high-demand intangible in short supply across the majors.

Frustrated fans often point to a high-paid player’s salary when he’s underperforming expectations. On the surface, it’s an understandable sentiment that’s certainly applies to Ray’s newly-inked five-year/$115 million free agent deal with Seattle. But this mindset is somewhat perplexing to me.

Sure, we want the players with the biggest paychecks to deliver results commensurate with their salaries. But that’s not how baseball works. To see what I mean, take a look at the 16 starting pitchers with a salary of $20 million or more in 2022 not named Robbie Ray. Five aren’t currently available to their respective clubs due to injury, another has been on the restricted list for over a year.

Not only that, Ray isn’t the only the high-dollar hurler encountering difficulties this season. Patrick Corbin, Marcus Stroman, and Charlie Morton all have a 5-plus ERA this year. Meanwhile, Madison Bumgarner has underperformed since joining the Diamondbacks in 2020.

To be clear, I’m not trying to diminish Ray’s bumpy debut with his new team, which is real. But committing over $100 million to a free agent is a risky proposition, especially to a starting pitcher.

Ironically, a segment of Mariners fan griping Seattle doesn’t spend enough money can manage to simultaneously complain the team has wasted its money when a high-dollar free agent scuffles. Sorry folks, that’s the risk teams take when they wade into the high-dollar end of the free agent pool.

The hardware doesn’t make the man

Earning the 2021 AL Cy Young Award was undoubtedly a big deal for Ray. It was a tremendous honor capping off an outstanding season-long performance. However, his taking home the hardware a year ago has raised expectations to ridiculous levels in the Emerald City.

Realistically, the version of Ray we saw last year may never appear again. In time, 2021 may eventually be viewed as the outlier season of his career. Am I doubting his talent or ability to rebound from his sluggish start this year?

Absolutely not. But it should be clear to anyone who’s followed along to this point in our conversation that Ray’s 2021 numbers far exceeded anything the lefty previously accomplished and what he’s given to the Mariners this year.

Perhaps Ray is destined to never repeat his Cy Young success with Seattle. But it won’t matter as long he remains healthy and improves his production to career norms. If this happens, the Tennessean will be an extremely valuable contributor to the Mariners in 2022 and beyond.

Even if he never wins another personal award.

Luke is a native New Yorker, who grew up as a Mets fan. After the US Navy moved him to the Pacific Northwest in 2009, he decided to make Seattle his home.
In 2014, Luke joined the Prospect Insider team. During baseball season, he can often be found observing the local team at T-Mobile Park.
You can follow Luke on Twitter @luke_arkins