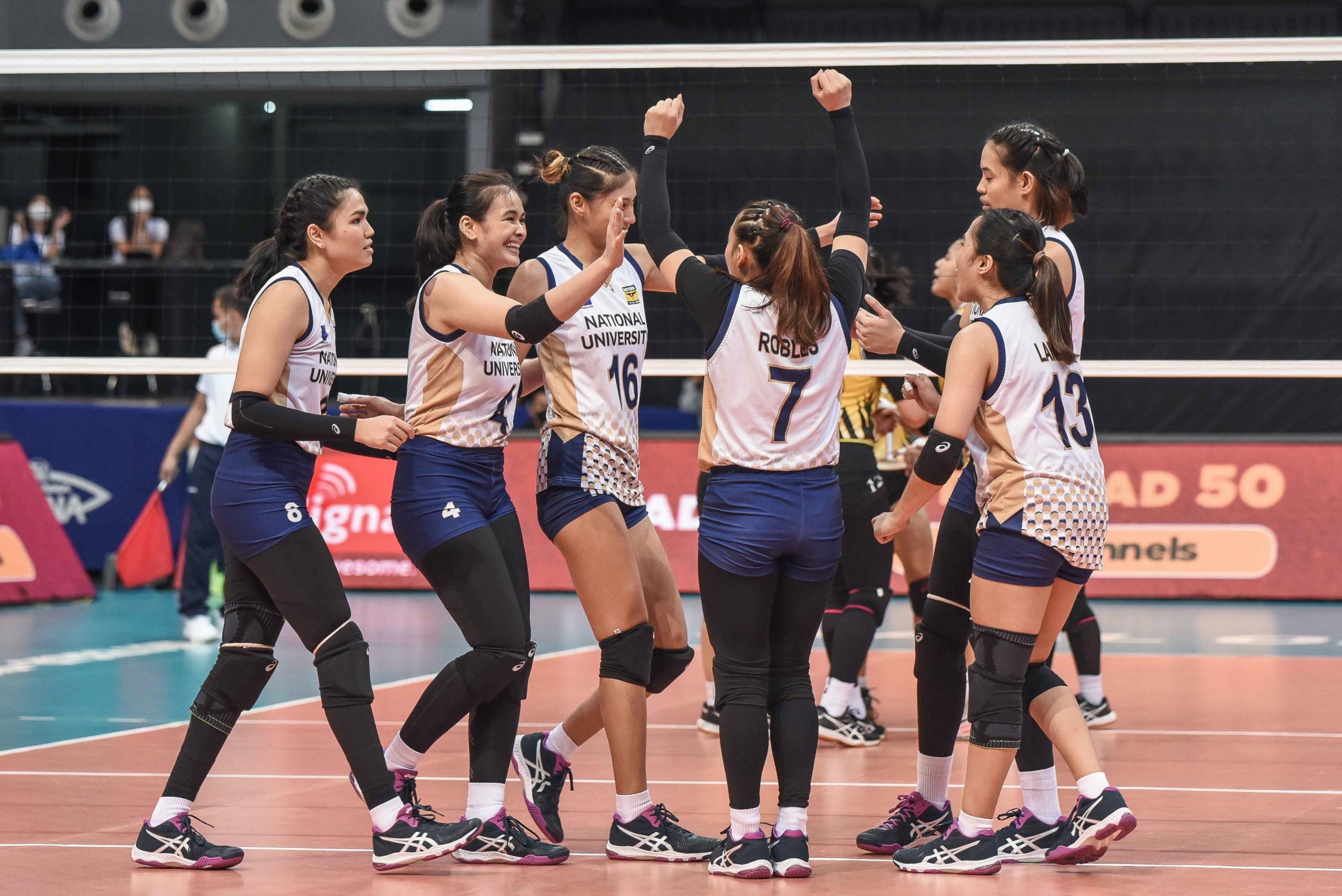 NU Lady Bulldogs are through to the UAAP Season 84 finals. UAAP PHOTO

After National University (NU) emerged unscathed at the end of the elimination round to book an outright berth in the UAAP Season 84 women’s volleyball finals, coach Karl Dimaculangan had one message for his team.

“I have to remind my players that our job is not yet over,” Dimaculangan said.

Apparently, there is no need for the reminder.

The Lady Bulldogs removed the final obstacle to a 14-game sweep of the preliminaries by blanking University of Santo Tomas (UST), 25-22, 29-27, 25-17, on Thursday at Mall of Asia Arena.

And National U’s young stars showed enough maturity to understand that the rare feat was just part of the bigger picture.

“We will enjoy this 14-0 now,” said libero Jennifer Nierva. “This is a big achievement for us. We will celebrate today but we go back to work tomorrow.”

NU hasn’t won a championship in this tournament since the 1956-57 season and hasn’t been this close to ending that dry spell even when the Lady Bulldogs were powered by superstar sisters Jaja Santiago and Dindin Santiago-Manabat.

“I’m very happy and thankful for this. Our hard work paid off. We expect the championship to have a higher level of challenge,” added Nierva.

Who Nierva and her teammates will face, however, is the question. And a grueling stepladder semifinals will spit out the answer.

The Adamson Lady Falcons, behind brilliant playmaking by Louie Romero, put themselves in a position to challenge NU’s unbeaten run after a spirited 25-23, 17-25, 25-16, 26-24 victory over the La Salle Lady Spikers earlier in the day.

“We worked hard, that’s all; we reminded the players that they need to really work for every point,” said Adamson head coach Lerma Giron, who at one point in the game urged her wards to not settle for being just a participant in the game.

The winner of that match will duel with the No. 3 Tigresses, who closed out with a 9-5 record.

The winner of that sudden-death showdown advances to the next step against No. 2 La Salle (10-4). The Lady Spikers will have twice-to-beat possession in that showdown.

The survivor of that matchup will earn the right to challenge NU for the title.

“We are thrilled and thankful personally to the players,” said Dimaculangan. “Now we finished the eliminations. But we expected these types of games which are intense.”

The intensity was cranked up in the second set, when the Tigresses dunked the Lady Bulldogs into a 16-20 hole. But a few well-placed shots by NU’s plethora of hitters like Alyssa Solomon, Princess Robles and Mhicaela Belen deflated the UST rally.

“We really worked hard for this. We sacrificed a lot especially in the bubble where we didn’t see our families often,” said Solomon. “But for the championship we will use all [our sacrifices] as inspiration.”

The last time a school swept the eliminations was when Ateneo ruled Season 77.

In the opening match, University of the East scored its first win of the season with a 25-22, 22-25, 25-21, 25-21 win over Far Eastern University. Both the Lady Warriors and the Lady Tamaraws finished the season with 1-13 records.