The Denver Broncos were one of several teams who made a bold move this offseason to acquire a player in the hopes that he would get them back to the playoffs.

The acquisition of Russell Wilson came at a high cost, but it has many in Broncos Country envisioning a Super Bowl this season. After all, if teams like the Los Angeles Rams and Cincinnati Bengals can pull it off after being a weak Wild Card team and a bottom feeder, respectively, why can’t the Broncos?

Football Outsiders‘ Mike Tanier is skeptical about this, as he anointed the Broncos a team that is contending what he calls the ‘Flat-Broke No-Future Wild-Card Challenge’, or teams that might lose in the first round of the playoffs, then find themselves in a bad position for the future.

On one hand, Tanier is correct that the Broncos are not a clear Super Bowl contender this season. On the other hand, the Broncos’ future isn’t as bad as it first appears, unless one believes the worst-case scenario is always fated to happen to teams who trade lots of assets for that one player they think will put them over the top.

To be fair to Tanier, he does acknowledge in his piece why the Broncos did what they had to in order to get to the playoffs.

“A team can be aggressive and jump-start its success right away instead of wailing and gnashing its teeth indefinitely. As the Flat-Broke No-Future Wild-Card Challenge illustrates, that aggressiveness comes with a great deal of risk. But taking the Broncos as an example, which would you have rather heard and seen from the George Paton/Nathaniel Hackett regime: Golly, this team has forgotten how to win, so let’s twaddle with Drew Lock and sign some Packers backups while waiting for the stars to align at quarterback?; or RUSSELL WILSON LFG BABEEEEE? Thought so.”

But does the Broncos’ bold move this year mean that their fate is to be a perennial Wild Card contender that is in no position to improve its chances because of its 2023 situation? Not necessarily.

What happens next for the Broncos? Don’t miss out on any news and analysis! Take a second and sign up for our FREE newsletter and get breaking Broncos news delivered to your inbox daily!

On One Hand: Not Yet a Super Bowl Contender

In order to be a Super Bowl contender, you have to be a playoff contender first, and that means demonstrating that, the year prior, you made the playoffs and have the potential to improve.

The Rams were the prime example of this in 2021. L.A. had been getting to the playoffs multiple years even with Jared Goff at quarterback. Some of the Rams’ success can be attributed to other key players, but head coach Sean McVay also deserves credit here.

The Broncos are not comparable to the Rams because, primarily, Nathaniel Hackett is a first-year head coach. While Hackett may have fans excited, he has not proven himself as a head coach — at least not yet. McVay, meanwhile, has proven himself.

Also, the Rams benefited to a degree after the Green Bay Packers had a lackluster playoff outing and were one and done despite claiming the No. 1 seed. The Rams, to their credit, played well throughout the playoffs, but it’s fair to ask if they could have done enough to beat the Packers.

Others might cite the Bengals, who went from being one of the worst teams in the NFL in 2020 to the Super Bowl the following year. However, the Bengals had a lot of breaks go their way.

After back-to-back seasons of futility that allowed the Bengals to draft Joe Burrow, then Ja’Marr Chase, they watched as the Baltimore Ravens lost too many players to injury, the Cleveland Browns regressed, and the Pittsburgh Steelers kept riding Ben Roethlisberger when he had nothing left in the tank. The end result was the Bengals winning the AFC North.

Then came the playoffs, in which the Tennessee Titans managed to get the No. 1 seed despite not being that good. And while the Titans managed to sack Burrow to a double-digit tune, Ryan Tannehill kept giving the ball back to the Bengals, who did enough to prevail.

The Kansas City Chiefs and Buffalo Bills, meanwhile, had the shootout that came down to whichever team had its offense on the field last. Then the Bengals found themselves about to be blown out by the Chiefs, until they went for broke, dropped everybody into coverage in the second half, and surprised everyone when it worked.

In other words, if the Broncos follow the Bengals’ path, they need a lot of outside factors they can’t control to go their way. They can’t count on that happening. Therefore, it’s more realistic to say that, while the Broncos are a playoff contender this year, we should dial down the Super Bowl talk until we see what they do during the season.

On the Other Hand: Future May Not be That Bleak

Now, let’s consider 2023 and the salary cap situation. The Broncos are, indeed, at $6.4 million above the cap in 2023. That’s not a lot of room, particularly when the Broncos have no draft pick until the third round.

However, it’s important to note that the number does not include any adjustments. The 2023 numbers, for all teams, are based on a projected base cap of $225M.

But that does not include any cap space a team may carry over from 2022 or any incentives players earn this year, both of which apply to the 2023 cap. The Broncos, like other teams, may see that 2023 figure change based on what happens this year.

We’ll start with 2022 carryover, which depends on how the Broncos set their final 53-man roster, the practice squad, and what players land on injured reserve. The first two could be reasonably predicted, while the third is harder to foresee.

Let’s be conservative here and say the Broncos gain an additional $9M in cap space after accounting for 2022 carryover (adds to cap) and incentives that players earn (subtracts from cap). The Broncos then have about $15.4M in cap space.

Now, let’s cut two players: defensive tackle Mike Purcell (who is on the roster bubble now) and offensive guard Graham Glasgow (who renegotiated his 2022 salary to stay with the team). The two combine to free $14.5M in cap space, meaning the Broncos are close to $30M in available space.

Of course, the Broncos will still need to fill roster holes, in part by extending a player or two. Tanier mentioned Bradley Chubb and Dalton Risner, but I would remind him that Dre’Mont Jones is a candidate as well. As I’ve said before, the Broncos might extend two of the three, but not all three.

Regardless, the Broncos have the flexibility to gain some cap space without having to cut too many players or restructure every single deal. While they can’t go wild in free agency in 2023, the Broncos should be able to do enough, as long as they don’t hit the “worst-case scenario” in 2022.

When I mention “worst-case scenario,” it’s possible that the Broncos are unable to get their defense to a level that allows them to compete against a loaded AFC.

Tanier notes that the Broncos ranked 20th in defensive DVOA next year. That has to improve if the Broncos want to have any shot at a deep playoff run.

On one hand, there’s no guarantee the Broncos’ defense keeps declining. On the other hand, holding out hope for a defense like 2015 is wishful thinking.

But it’s still possible the Broncos could have a better defense that complements the offense. It does mean, though, that enough must go right.

Let’s look at the worst and best-case scenarios for the defense at this point:

Best-case scenario: Gregory and Chubb stay healthy and are productive, Browning fares well in his new role even if he isn’t dominant, Bonitto produces in a rotational role and shows starter potential, D.J. Jones proves worthy of his contract, Caden Sterns, Ronald Darby, and others emerge to help Surtain and Simmons in the secondary, Josey Jewell stays healthy and Jonas Griffith takes the next step, meaning Singleton doesn’t have to take a large role.

In the best-case scenario, while the Broncos aren’t a dominant defense, they could be a good defense, at least one that takes pressure off of the offense. Getting into, say, the top-12 in defensive DVOA in 2022 would be enough to give the Broncos room for optimism going into 2023 (provided, of course, the offense does its job).

As far as what to do in 2023, in the best-case scenario, the Broncos could either keep Chubb or let him walk if they believe Bonitto can handle a starting role and players like Jonathon Cooper and Christopher Allen show they are worthy backups. The Broncos will likely extend Dre’Mont Jones and the fate of Risner may depend on what the team does with Chubb.

The Broncos will have to address the offensive line in 2023 to some degree. If things work out on defense that they can let Chubb walk, they could bring back Risner, cut Glasgow, start Quinn Meinerz (the latter of whom may start this year anyway), re-sign either Billy Turner or Calvin Anderson to a low-cost deal, then figure out what to do at center, which may be answered if Lloyd Cushenberry III can get on track, or if Luke Wattenberg develops.

Certainly, there are questions that must be answered for both 2022 and 2023 before one anoints the Broncos with a Vince Lombardi trophy. But while those questions currently remain unanswered, it doesn’t mean it’s the Broncos’ destiny to be stuck in the race for the No. 7 seed in the playoffs, followed by a one-and-done result.

Tanier isn’t wrong to point out the risk involved with the Wilson trade, but as he acknowledges, better to take that risk than stick with mediocrity. However, the Broncos’ future may not be as bad in 2023 as some may think. That’s why we need to see what happens in 2022 before we pass judgment on the 2023 season.

The one thing to remember is this: No matter what happens in 2022, don’t fall into desperation mode in 2023. That’s what the Browns and New Orleans Saints are in right now.

If the Broncos don’t make it to the Super Bowl, don’t assume all is lost or that they have to make another “all-in” move. Instead, figure out what went right, what didn’t and adjust accordingly — and know that you should have some flexibility to make those adjustments. 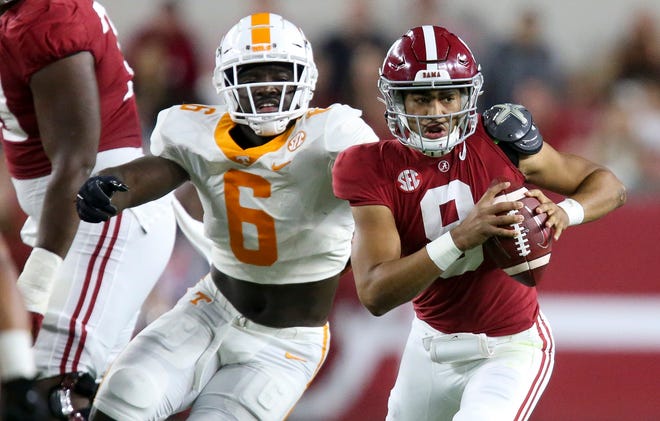