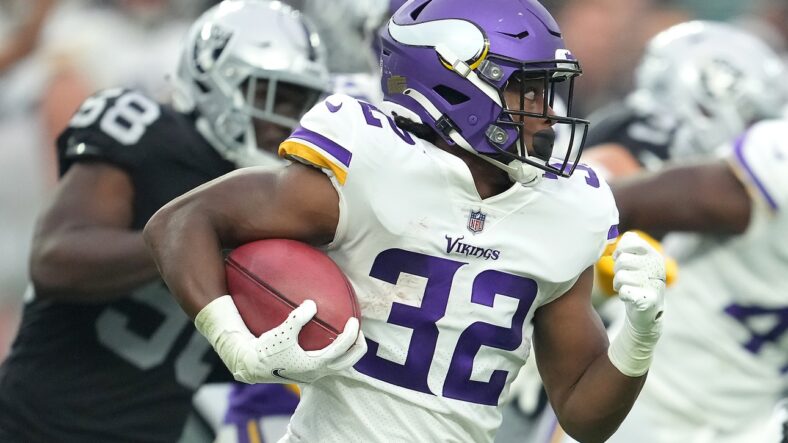 In the latest rash of injuries to the 2022 Vikings rookie class, rookie RB and preseason star Ty Chandler landed on IR this week after suffering a broken thumb in Sunday’s win over the Chicago Bears. It was the first time that Chndler had been activated to the active roster this season. With this latest injury, the Vikings now have four rookies that will have missed games due to injury:

That list could grow to five by the time this weekend rolls around depending on what happens with CB Akayleb Evans and his concussion.

Chandler burst onto the scene this preseason by rushing 15 times for 115 yards over the course of the three exhibition games. The injury occurred during a special teams play; a unit that has become strangely notorious for injuries on this Vikings team.

In response to Chandler’s injury, the Vikings added a new player to their roster on Tuesday. That player is rookie safety, Theo Jackson. He was the 204th overall pick by the Tennessee Titans in the 2022 Draft, and he is yet to appear in a regular season game.

Jackson played five years of college football with the Tennessee Volunteers where he appeared in 47 games. Over those five years, he recorded 190 tackles, including 12.0 TFLs, 1.5 sacks, and he intercepted three passes with 17 total pass defenses. 11 of those pass defenses came during the 2021 season.

Coming into the 2022 Draft, Jackson was known for his athleticism. At the combine, the safety recorded a 40-yard dash of 4.46, and his vertical leap was 37 inches. With that type of athletic ability at 6’0 and 197 pounds, there’s always going to be some type of potential.

Simply put, Jackson needs to improve his instincts on the football field, especially in pass coverage. He gets lost in coverage too often to consistently be relied upon. With veterans like Harrison Smith and Patrick Peterson in the Vikings secondary, perhaps they can get something out of him, though.

The Vikings next game is this Sunday against the Miami Dolphins, so we’ll see if the rookie safety gets any run.

Josh Frey is a Class of 2020 graduate of The College of Idaho with a bachelor’s degree in Creative Writing as well as minors in History, Human Biology, and Journalism. When he’s not writing about the NFL, Josh enjoys marathon training, playing video games, or rooting for the Milwaukee Brewers and Bucks. For more of his takes, NFL and otherwise, check out his Twitter account: @Freyed_Chicken